Richard Wilson is an award winning visual artist who uses reality and creativity to produce images that reflect the beauty in the world around him.

Like most gifted artists, Richard’s talent developed at an early age. His unique abilities were first recognized by family, friends, and classmates. By age 8, Wilson was skillfully crafting images of trucks, action figures and cartoon characters for his classmates in his hometown of Robersonville, NC. Under the mentorship and influence of his father, he continued to develop his artistic skills.

After graduating from SouthWest Edgecombe High School in Pinetops NC, he attended Barton College to pursue his dream. There he studied Communications Art and began investing in his future as an artist. He later received a degree in Advertising & Graphic Design from Pitt Community College, and after graduating he served as an instructor in the same art department in which his own dream was cultivated.

Richard Wilson’s resume resembles that of an older accomplished artist. Given his masterful execution and the universality of his subject matter, Richard’s work is both acclaimed by professional artists and has strong popular appeal. His narrative paintings frequently feature his own family and in particular his children in those special moments that only children have while growing up. Wilson’s artistic strength is his capacity to select those moments that transcend the personal and can reach a broader audience. Some paintings are nostalgic, some express those human connections that are only found within the family, and some express the challenge; in all of his paintings there is warmth and discretion. The artist does many commission portraits as well and has that uncanny capacity to extract personality and depth from his subjects faithfully represented in his realistic style.

Wilson has produced an impressive twenty-year career as a productive professional artist, freelance and corporate graphic designer, and teacher at Pitt Community College. He has artworks in numerous collections, public and private, but is most proud of his official portrait of George Henry White, the last former slave to serve in Congress, and the fact that Wilson is the first African American artist to have a portrait publicly displayed in a North Carolina courthouse. In November 2018 Wilson was featured in the Wall Street Journal and recognized by writer, Daniel Grant as “one of the most successful artist that you’re likely to meet”. Wilson was recently commissioned by the University of Georgia to paint the portrait of Mary Frances Early, the first African American to graduate from the University. He was selected by Blue Moon Brewing Company as one the 20 Up and Coming Artist in the United States to design a Limited Edition label for their 20th Anniversary Blue Moon Artist Series bottles. Wilson paintings were featured on the big screen in the fall of 2016. Five of his works were purchased for the movie “Barbershop – The Next Cut”, featuring actors, Ice Cube, Cedric the Entertainer, Common & rapper Nicki Minaj. He was featured on the cover of Sunshine Artist magazine in March of 2013 which is a popular national art magazine that highlights the top art events in the country. In November of 2013, Art Collectors Magazine highlighted Wilson’ s studio and work as a destination to see in the Carolinas and in December of 2013 his figurative work was also highlighted in Art Collectors magazine. During his career Wilson has received numerous local, national and international awards; in 2018 he received the top prize in winning the First Prize, Pastel Journal Founder’s Award in memory of Maggie Price in the 20th Annual Pastel 100 Competition and was featured in the April 2019 issue of the Pastel Journal, America’s leading magazine devoted to pastel artists. In 2002 he received the prestigious National Arts Club Award. Amongst his many shows, competitions and accolades, in 2005 he also won First Place in “The Best of North Carolina” Juried Publication and in 2006 Pastel Society of New Mexico Award at the Pastel Society of America 34th Annual Art Exhibit, National Arts Club, NYC. In 2011, the International Tennis Hall of Fame acquired one of Wilson’s “Shadow Series” painting, titled “In His Shadow” depicting a young boy inspired by Arthur Ashe, for their permanent collection. Wilson’s work is being collected by collectors all over the world. Some of his notable collectors are Legendary Hall of Fame baseball player Henry Hank Aaron, Tina Knowles – Designer & mother of singer Beyonce’ Knowles, Gladys Knight, Tom Joyner, Ed Gordon, Victoria Rowell, Bev Smith, Anne & Clifton Davis, Wendy Raquel Robinson, Judge James Wynn and many more. His work can be viewed in books and museums, as well as private and public collections

Let yourself be drawn into the paintings of Richard Wilson and find comfort in the familiarity of the images. You will find that his work journeys deep into the souls of his subjects. 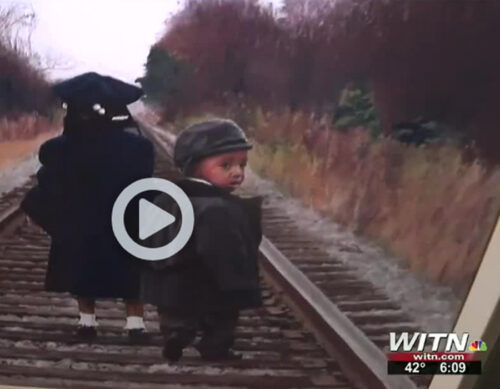 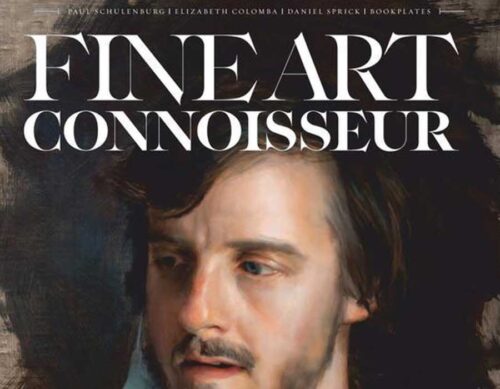 Richard Wilson makes his own way 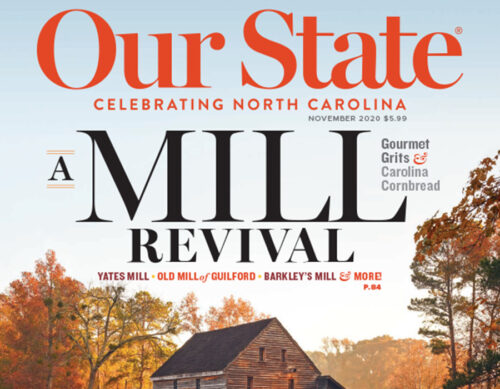 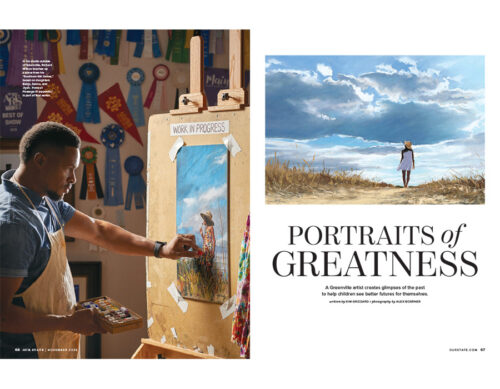 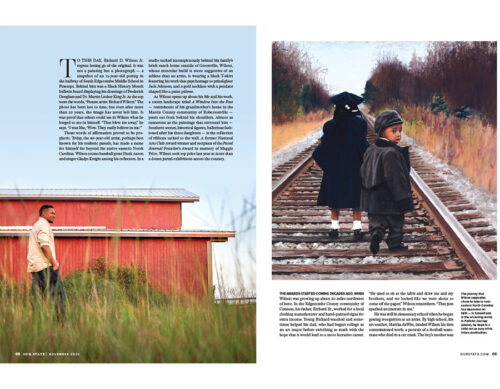 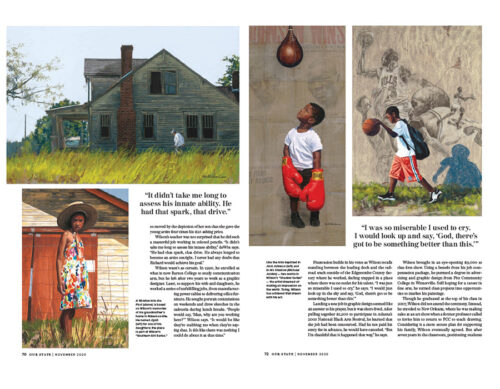 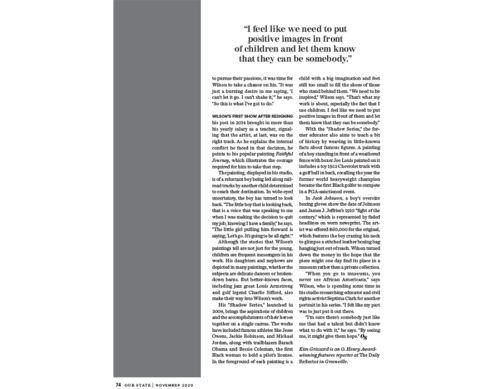 A Greenville artist creates glimpses of the past to help children see better futures for themselves. 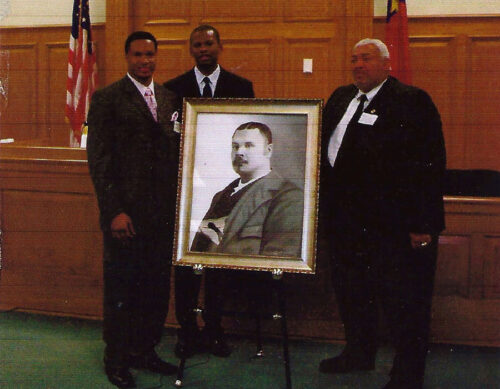 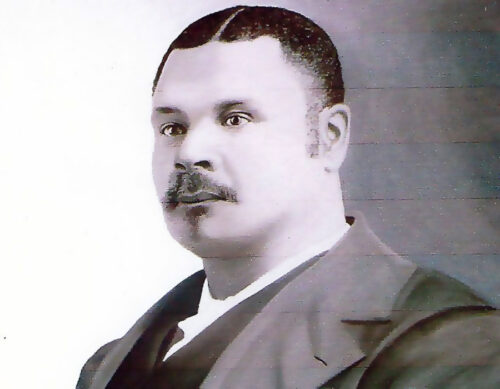 Richard Wilson made history in North Carolina, by becoming the first African American artist to have a portrait painting publicly displayed in a North Carolina courthouse. His painting is hanging in the Edgecombe County Superior Courthouse in Tarboro, NC. George Henry White was the last former slave to serve in Congress. 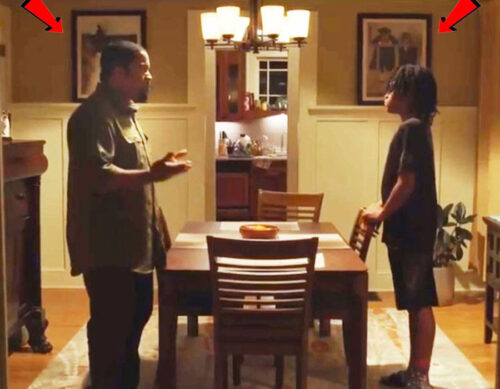 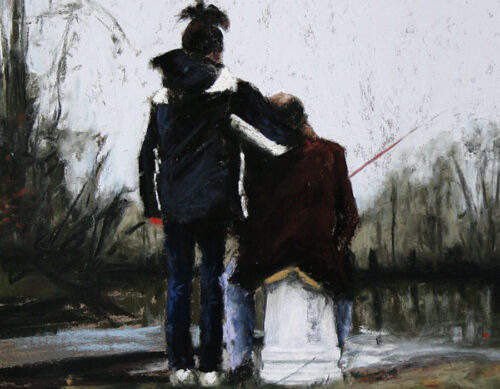 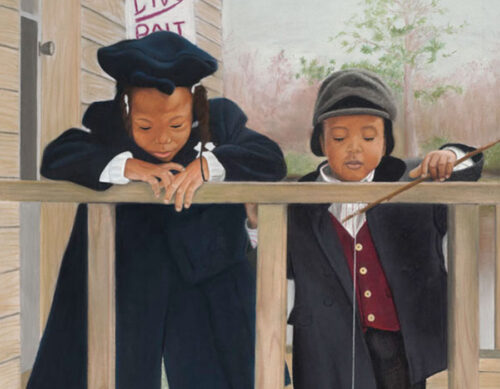 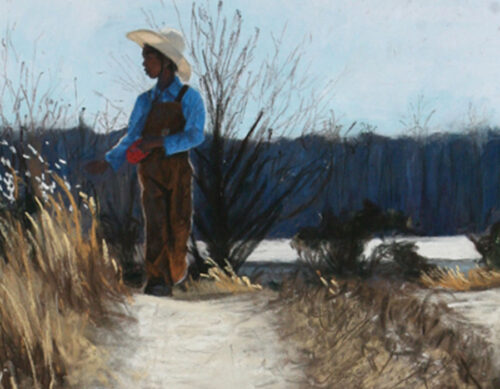 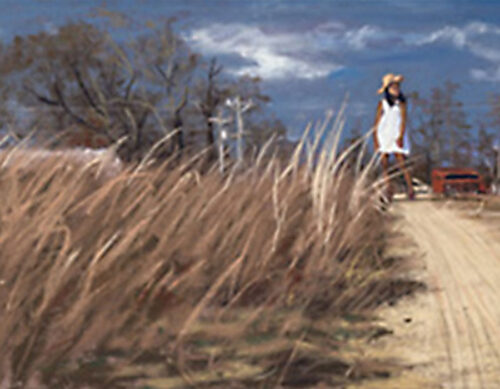 Barbershop – The Next Cut. 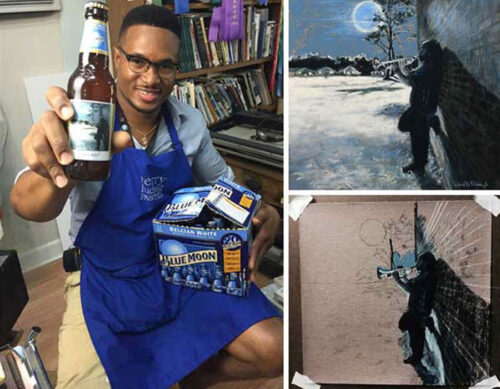 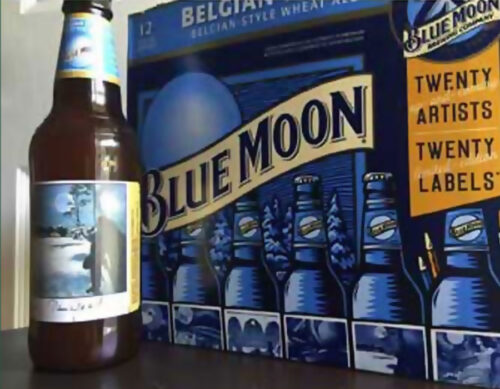 Once in a Blue Moon.

In 2016, award wining artist, Richard Wilson, was selected by Blue Moon Brewing Company as one of the 20 Up and Coming Artists to create a painting for their 20th Anniversary beer labels.

Blue Moon Brewing Company launched a limited edition series called the Blue Moon Artists Series, with artwork of 20 artists across the U.S. featured on bottles which were available for purchase in stores everywhere. For those who missed the chance to collect one of his signature beer bottles, now you have the opportunity to purchase a Glicee print of the image “Once in a Blue Moon”.

Buy -Once in a Blue Moon- Prints 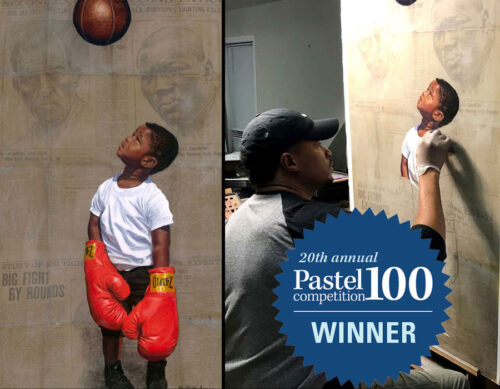 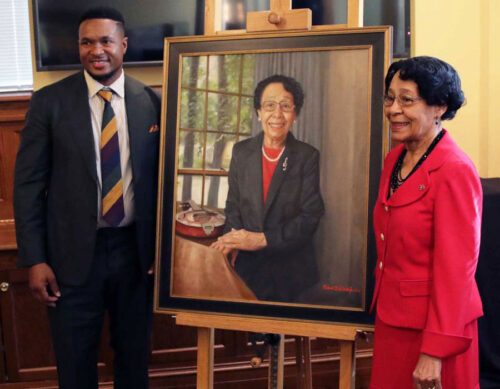 Richard was commissioned by the University of Georgia to paint the official portrait of Mary Frances Early, the first African to graduate from the University. 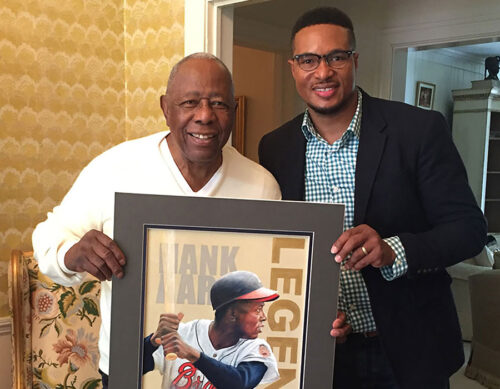 In April 2016, the legendary Hall of Fame baseball player Henry “Hank” Aaron, invited Richard to his home and signed his original painting that the artist created for him. Mr. Aaron was so impressed with Richard’s Artwork, he commissioned him to paint to original paintings of his grandchildren. 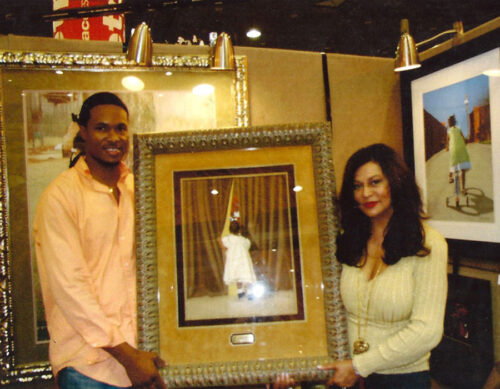 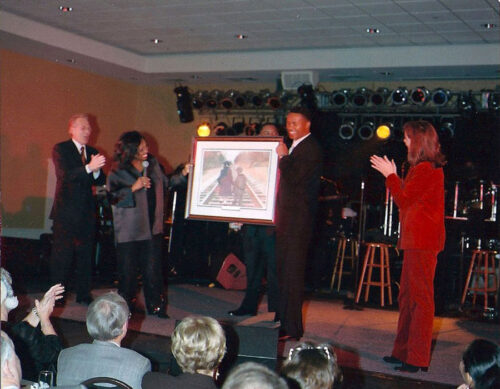 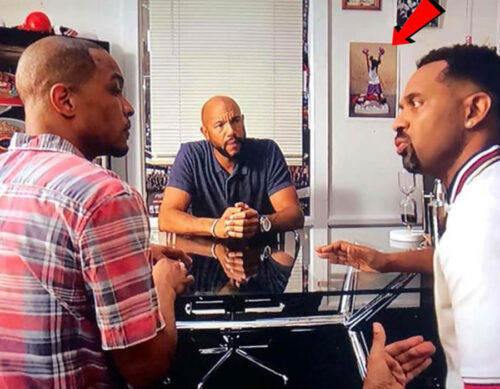 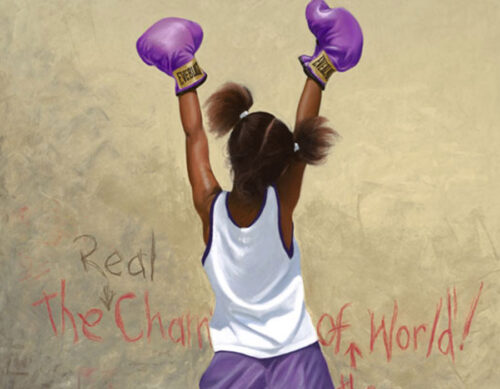 Richard Wilson’s Artwork was featured in the Netflix movie “The Trap”, featuring actors: TI & Mike Epps. “The Writings on the Wall II” is the featured artwork.

Buy -The Writings on the Wall II- Prints 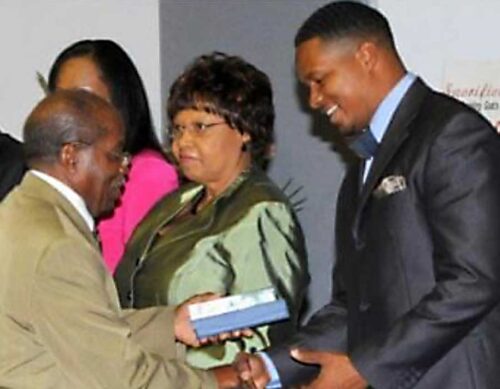 Pitt County NAACP Greenville, North Carolina. Thanks to Calvin Henderson, President of the Pitt County Chapter of the NAACP and the entire organization for the recognition and their dedication and continuing hard work in fighting for justice & uplifting of our community.