GREENVILLE, N.C. (WITN) – A local artist is making history one painting at a time, with many of his pieces displayed in historic places and of prominent people.Richard Wilson followed his dreams and pursued an art career.His work is documented throughout the country and earns him an additional title of Black history maker.In the Edgecombe County Courthouse, you’ll see a painting from 2005 that made Richard Wilson the first Black artist to have a painting displayed inside a North Carolina Courthouse, inspiring young artists everywhere.

Wilson also painted the first oil portrait on display at the Pitt County Courthouse of the late Earl Brown.You can see Wilson’s work in a lot of different places and of History makers themselves.Wilson painted baseball legend Hank Aaron, and in 2016, the legendary hall of fame baseball player invited Wilson to his home and signed that original painting.

Hank Aaron also commissioned him to do more work for his family, and Wilson had also planned to paint a second portrait of Hank Arron.The baseball great died at 86 earlier this year before Wilson could paint the second piece. But Wilson’s artwork lives on through Hank Aaron’s portrait and in many places. One painting appeared in the Wall Street Journal, and his artwork is visible on the big screen in movies like Barber Shop.

Wilson lists celebrities, such as Beyonce’s mother, Tina Knowles, as a client.He was selected by Blue Moon Beer as one of the 20 up-and-coming artists and had his submission piece was on the label of the lager sold country wide.Wilson was asked back in 2005 to complete a portrait of George Henry White to hang in the Edgecombe County Courthouse, the last former slave to serve in Congress.

It is that work that solidifies Wilson’s place in history and his work now continues tp affirms his decision to follow his dreams, quit his teaching job, and become an artist full-time.Wilson used to be a full-time professor at Pitt Community College, painting in his free time.

“I was a little unsure if this was the right thing so that’s what the painting, ‘Faithful Journey’ is about.”

The little boy represents the uncertainties of Wilson’s future while the little girl confirms that this path is his calling.Wilson says the first show he did after leaving his teaching job made him more money than teaching for a whole year.He now travels the country participating in art shows and talking to students.

“I enjoy that because it’s another way for me to give back and be able to encourage other people to follow their dreams as I have as a full-time artist.”

A senior art student at ECU says she was inspired by Wilson’s story after seeing a study that says only 1% of Black artists are recognized in the top museums in the country.

“As a young Black artist who wants to do art full time, I only get to see 1% of Black people making it. And so to see and hear about somebody who is Black, who is doing things like that, and making history with his art is extremely inspiring.”

Wilson hopes his story and life can inspire others.

“Never give up. Follow your dreams because you have that dream for a purpose. One of my main focuses is doing African American images because you don’t see that many in museums and that’s another reason why I wanted to travel and show these positive images because this is my life and so many others and a lot of people of different races don’t get to see this side.”

Wilson’s work is also displayed in the International Tennis Hall of Fame and the show, “This is Us.”

Wilson says all the girls that are in his paintings, are modeled after his daughters and all the boys he paints are his nephews.

This story is part of WITN’s celebration of Black History Month. 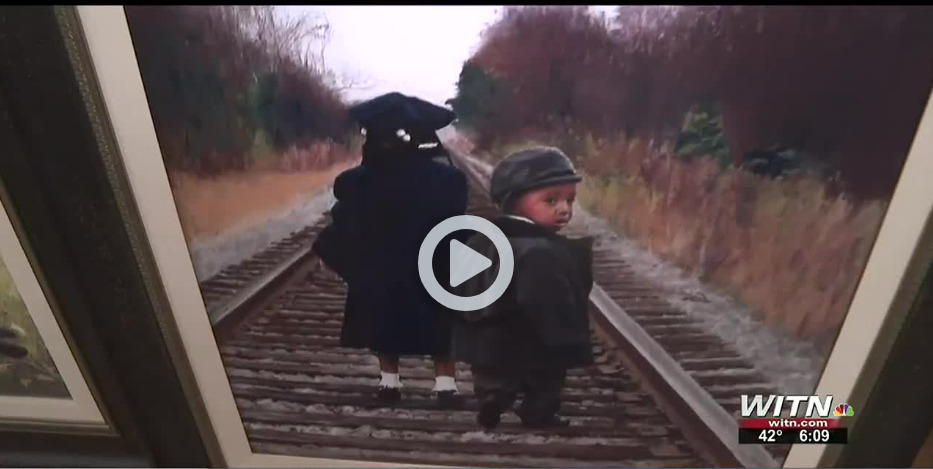